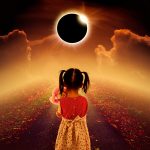 and the other the past.  One of the plates is the old Piscean Age that is passing and the other the Aquarian Age that is coming into the present and will stay with us for 2,000 years.  The old force, the Piscean Age, is struggling to stay alive but its’ struggle is creating the big shift to the new Aquarian Age.  Along with this old Piscean Age goes the characteristics of this age.  It has served its purpose and helped us along for about 2,000 years.  We are gradually shedding its qualities that no longer work in a new Age of Enlightenment, Rational thinking and development of the individual.

Of this old Piscean Age, or the Age of Water/fluids and emotions were several man-made religions that were all created during its existence.  All of these religions will gradually fade and leave us so that by 2080, it will look odd to belong to a religion and will seem very strange to people that anyone would join one.  Hard to believe in today’s world!  These three religions are Rabbinical Judaism, Christianity and Islam.  All were created during the last age.  All were man-made.  Rabbinical Judaism and Christianity were created as an outcome to the chaotic years of turmoil during the Greek/Roman wars.  Rabbinical Judaism was a result of the loss of the temple and an attempt to preserve the old Israelite teachings. Christianity was needed to create a following  after the death of Jesus.  It would take several years before Christianity would take hold as a major religion.  It originally depended upon the army to boost its forces–hence the song “Onward Christian Soldiers”.  Islam was created several years later in approximately 635 AD, again by a man who supposedly was visited by a force of the almighty.  Notice in all these religions the power of “a king”.  This gives the Bible lessons of today a force called “the kingdom” of God etc.

These religions served a purpose for the times.  They gave a sense of control of the people, it taught much about fear as God was usually presented as vengeful.  It taught people that you had to make sacrifices to God, the Church, the Temple etc. in order to be rewarded, redeemed or saved.  It taught that this life here on earth was tough, hard, painful etc. and that the life hereafter could be terrific, peaceful, airy and fabulous.  Of course, only if you lived, suffered, were ridden with guilt and sacrificed here on earth first.  If anything should be said for the teaching tool of this era, it was fear.  Why do you think people would blow themselves up to get out of here?

Fortunately, if you can look at that age in a rational way, you can see the laws, rules and controls that govern all of them.  They are all made by man or men.  Yes, supposedly, they were Godly men but they weren’t stupid.  There was always a pecking order to each religion.  There were various levels of rabbis, priests and imams.  There were fancy outfits, hats and shoes to make sure you were not accepted as an ordinary person.  There were strict dietary laws and rules up the river.  Lots of superstitions and shunning if you didn’t obey.  Fear is an exceedingly strong tool of control.  Plus, the religious orders were businesses.  Even today we have a category of “religious Pastor-preneurs”.

Now, today, the Age of Aquarius, is not about religion at all. The lovely old temples and churches are emptying out.  Those that have congregations are increasingly aging in place and striving to stay relevant in this Aquarian Age.  Even yesterday’s Wall St. Journal had suggestions on what could be done with these old architectural wonders to another age.  Many are now even used as shopping centers and skateboarding arenas.  Still others are made into condos.  Others are being torn down.  The Aquarius Age is more of the practical over the sentimental.

What people are seeking today is a sense of community.  We are not solitary creatures.  We want to belong to groups but not necessarily to a religion.  We form groups today around mutual interests with no interest in worshiping anything.   This is especially true of the millennials.  Even the Gideon Bible is no longer being dropped off in hotels.  People can read the Bible online if so inclined.  They still seek a “higher power” and a greater understanding of the world as it exists but it isn’t tied to man-made religious orders.  They realize that there isn’t a “sky God” handing out rewards and punishments sitting on a cloud somewhere.  They don’t have to do 20 Hail Mary’s to relieve themselves and they don’t have to even consider purgatory.

They are understanding the rights of the individual to develop itself in the world without the superstition attached to past religions.  The individual in all styles of gender, dress and look is learning to love itself without condemnation and judgment from religious dogma.  We are all headed that way but it takes time.  Give it another 60 years in the United States and probably more in other parts of the Middle East and Africa.  Several generations will have left this earth and the younger generations will think very differently of today’s religious dogmas.    Once, though, the rise in female power takes hold in 2024, there were be even more openings to free humankind from the shackles of these religions.

Each time period has its positive sides.  From the Piscean Age we were taught about compassion.  This is a powerful tool to add to our evolutionary box of human progress.  We carry that now with us and it can be used to understand others’ suffering.  The Aquarian Age gives us the freedom of religion and freedom from religion.  As we develop as individuals but not necessarily as religious individuals, we give others the right to do the same.  Condemnation and judgment so prevalent in most man-made religions will fade along with superstition, primitive symbols and made-up narratives.

Tagged: Death of religion, death of the Piscean Age, freedom from religion, religions are dying in the US
9 Comments

9 responses to “Religion is Fading as Aquarian Age Rises”