Do you remember Hans Christian Anderson’s famous children’s tale of “The Emperor’s New Clothes”?  It is a wonderful 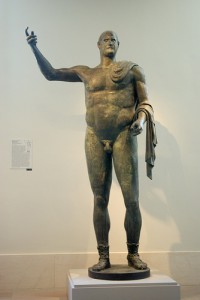 tale that seems to be true today as it was back in 1837 when it was first published.  The actual story is about two weavers who promise the vain and self-absorbed Emperor a new suit of clothing that would be invisible to those who were not fit for their positions, who were stupid or just plain incompetent.

Now the Emperor can’t see the clothes himself.  He has to pretend he does otherwise he, himself, would be incompetent and unfit for office.  In the end, he is dressed by a mime in these invisible clothes and marches in front of his subjects.  They, too, pretend that they can see the clothing and go right along with the Emperor’s pretense.  In the crowds a young child yells out that the Emperor is wearing nothing at all.  The Emperor is aghast as he suspects the truth.  Instead of owning the truth, the naked Emperor proudly continues the parade.

The Ideology of Catastrophe

Hmmmm!  Let’s see.  In yesterday’s Wall Street Journal, April 10, 2012, there is an excellent article by Pascal Bruckner entitled “The Ideology of Catastrophe”.  It speaks to the current phenomena so prevalent in the United States and Europe that the End is nigh and that so many people have convinced themselves to be in fear of progress, global warming, science, demographics, technology and food.  Some of this fear is that “in 5 years or in 10 years, temperatures will rise, Earth will be uninhabitable, natural disasters will multiply and nuclear plants will explode.”  He speaks to the technique of accumulating a huge amount of horrifying news and then—at the end—tempering it with a slim ray of hope.  He goes on to say “first you break down all resistance; then you offer an escape route to your stunned audience.”

There is a gradual sense that the Cassandras who prophesy throughout the internet and media outlets to whomever will listen intend not only to warn us but also to condemn us.  Sort of like you will get what is coming to you.  These modern-day prophets are not powerful people of ancient days but opportunists who become quite angry when we don’t listen to them.  So many of them are like the Emperor who has no clothes.  It takes a child to call the truth to those observing the procession.

One response to “The Emperor’s New Clothes –in modern times”