I recently spoke at the Southwest Dowser’s Conference in Flagstaff, Arizona.  This was the intention of the visit.  The real purpose I found out was something else.  After speaking twice during this conference, I was invited to travel to the Hopi Indian Reservation about two hours away.  I have never spent any time on an Indian Reservation.  The closest I have gotten was driving through them in South Dakota, Arizona, New Mexico, Oklahoma and California.  They always seemed very barren, dry and uninviting.  They always seemed devoid of population. 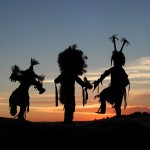 After a dry landscape drive from Flagstaff, we arrived on the reservation at Ernie’s home and gallery.  I say gallery lightly.  It was really a trailer with a nondescript side building or trailer for storage.  There were a few stray dogs and sagging wooden stairs into the “gallery”.  Ernie was to be my guide for the rest of the afternoon.  He is a tall, welcoming man, hefty in size and quite commanding.  I found out he had been a bounty hunter for 15 years–a bounty hunter who never used or carried a gun.  He met with the “client” and literally talked them into turning themselves in.   It was either go with Ernie peacefully, who would try and mediate on your behalf, or wait for the police for a pretty basic unpleasant solution.  Ernie has a way about him.  You will definitely listen and reason with yourself.

In this barren, inhospitable terrain, this is what I learned listening to Ernie.  First off, the Hopi are a very peaceful tribe.  They do not allow any casinos on their reservation.  You cannot take a photo of anything, nor can you take away anything from the land (such as a rock or pebble).  You cannot see their petroglyphs or prophesy rock without an Indian escort.  Actually you cannot drive around on the reservation without being observed and perhaps followed.  The reservation police drive around in unmarked pick up trucks and have very watchful eyes.

The Hopi believe that we own nothing.  Everything belongs to Mother Earth and it is foolish to hoard cars, houses, stuff.  It is wiser to hoard seeds so that you can feed yourself in hard times.  If you pick up a broken piece of ancient pottery which is very prevalent, you must leave it on a rock called “payback” rock.  You cannot take anything from Mother Earth without giving back to her.    Ernie went on to say that he makes investments but they are investments in other people’s abilities.  For example, he helps artists make and paint the Kachina dolls.  Some of these artists are novices.  Rather than correct and discourage, he buys their first pieces and tells them that “he knows one day they will be very good and expensive and that he must buy it now before they become too expensive to purchase.”  In this positive way, the budding artists develop faith in themselves.  It is always about encouraging independence in the individual.  Ernie went on to say that you must “become something before you can do something”.

In this barren land Ernie pointed out all the large clam shells that have become fossils.  He pointed out the scrubby bush whose tiny leaves, when placed in water, make a wonderful shampoo.  Another bush had aphrodisiac qualities and that they would place its branches in the watering hole for the horses of the soldiers so that they would not be able to follow them.  The petroglyphs were inspiring.  They tell the Hopi tale of what was and what is to come.  They even have carvings of space visitors.  These barren lands are rich in history and sacred story.  After awhile you become very quiet as you know you have entered a very special space in time.  You have entered another world.

For those of you who might want to experience the Hopi Reservation more entirely, contact me and I will put you in touch with Ernie.  You will be changed.  The reservation is very poor.  They have a water problem and carry their water in 5 gallon containers.  Many of the homes have dirt floors.  They are very clean and very well decorated inside.  The dogs are free to roam at night and hunt.   They return in the day to their homes.  I arrived at a place where an American is helping them dig a water well.  I was greeted with at least 6 dogs who were friendly and indifferent.

Ernie has three empty houses out on the reservation where people can stay.  Of course, you will have to live off the land for your food and water.  There is no electricity or running water in these three houses.  For those who want to come and meet themselves in the magical space called “the beginning”, I encourage a visit with Ernie.

Incidentally, I picked out and purchased a Kachina doll.  I asked Ernie the meaning of the Kachina that I chose.  He told me it was the Female Sun who lives in the house that holds the sun.  She is there at sunrise and sunset and peaks over the mountain to shine on everything she touches.  She brings morning light–first light and brings light to all.  Through shining this light, she helps others gain independence.

Nobody spoke during the drive back to Flagstaff.  There  was much to process.