Alexander The Great Is Still Affecting Your World

“Wait for the wisest of counselors to judge you……..time.”  Pericles

We all have heard of him but what did he really do?  How could he be affecting our world today?  What did he 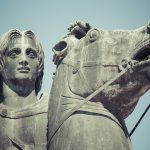 have to do with modern day beliefs and habits?  How do many of the life styles we have today go way back to Alex?  He was truly great.  Here is a young man from Macedonia who decided to change the world on horseback.  No small feat!  He died around the age of 32 so he definitely was an ambitious and smart king.   He was born in 356 BC in the ancient Greek kingdom of Macedon.  By the time he died he had created one of the largest empires of the ancient world.  It stretched from Greece to northwestern India.  To give you an idea of his brilliance, he was tutored under Aristotle.  He did this all in only 10 years.

A brief history here.  Apologies to professional historians.  Back in the ancient world there existed the “temple-state”.  This ruled the part of the world we now call the Middle East.  This goes back thousands of years and involved the Israelite and other tribes.  Through Alex’s invasions he was able to destroy this 3500 year old (just think of it three thousand five hundred years) way of life called the temple state.  After the destruction of this form of governing, people became adrift.  Greece played a huge role in governing this part of the world until they were overthrown by the Romans.  For hundreds of years, Greece culture, teaching etc. was supreme.   During this same period many cults were formed with various forms of teachings.  This all happened prior to Jesus’s birth.  We had the Stoics, the Gnostics and other important groups that people joined for a sense of community and search for a substitute for the temple-state.

The religions that were formed as a result of this enormous change of power were Christianity, Rabbinical Judaism and Islam.  They all took several hundred years to come into being.  The old temple state of the Israelite was destroyed and approximately 150 years after the temple destruction, the new Rabbinical order was created.  Christianity came about approximately 50BC and Islam around 700AD.  They began to morph and change into teachings that were written and created by men and catered to the life and times of the day.  Many of the religious rules, regulations and narratives were borrowed or invented from other pagan religions or from the cults.  One of best known cults of the day were the Stoics.

In fact, if you study the Stoics (their time existed at least 500 years before Christ) you will read the same words that were attributed to Jesus several hundred years later.  They definitely plagiarized a lot when they were forming these new religions.

So what does all this have to do with today?  Well one of the issues to note that as this old Age of Pisces gradually fades away, these religions will too.  Some of the teachings will remain but their roles will weaken as people understand the narratives, how they came about and become more enlightened as the Age of Aquarius replaces the old Age.  The anger and fight you see going on today is very similar to the period of the time when the old Temple State was destroyed.  People stumble or cling.  The righteousness comes out of the woodwork.  The religious cling every tighter to their beliefs.  If the Bible says it is so, it must be.  It must be in the Koran.  Once you begin the study of the Ancient worlds, you will learn how writers wrote to manipulate and control.  This is not to say that the core teachings aren’t wonderful but that the writings themselves are suspect and should be questioned.

The Stoics, the Ancient cult formed as a result of Alexander’s conquest, made the Wall Street Journal this week.  Amazing.   (I would recommend you read the stoics writings and see the similar teachings that were attributed to Jesus Christ hundreds of years later.)  The Wall Street Journal has an article (May 27-28, 2017) by Massimo Pigliucci, “Rules for Modern Living from the Ancient Stoics.”  In fact he has come out with a new book “How to Be a Stoic:  Using Ancient Philosophy to Live a Modern Life” published by Basic Books.  I think he has pulled some really valuable lessons for each of us to use today.  You might want to get a copy and learn this ancient wisdom.

Here are a few that will help you:

1)   Learn to separate what is and isn’t in your power.  Understand the difference.  The 2nd century slave-turned-teacher, Epictetus put it in his manual of ethical advice.  “Some things are within our power, while others are not.  Within our power are opinion, motivation, desire, aversion and, in a word, whatever is of our own doing: not within our power are our body, our property, reputation, office and, in a word, whatever is not of our own doing”.

2)   Consider the broader picture.  Look from time to time at what the Stoics called “the view from above”.  It will help you put things in perspective.  The Roman Emperor Marcus Aurelius wrote in his “Meditations” “Altogether the interval is small between birth and death; and consider with how much trouble, and in company with what sort of people and in what a feeble body, this interval is laboriously passed.”

3)   Think in advance about the challenges you may face during the day.  Preparing your mind can make all the difference between success and failure.  Epictetus again said “If you are going out to take a bath, set before your mind the things that happen at the baths, that people splash you, that people knock up against you, that people steal from you.  Say to yourself at the outset, ‘I want to take a bath and ensure at the same time that I maintain my harmony.'”

4)   Be mindful of the here and now.  The past is gone.  You have no control over it and you can’t change it.  Let it go.  The future will get here sooner or later.  You can only act where you are today.  Seneca, the Roman Senator wrote, “Two elements must therefore be rooted out once and for all–the fear of future suffering and the recollection of past suffering;  since the latter no longer concerns me, and the former concerns me not yet.”

5)   Before going to bed, write a personal review diary.  This will help you forgive your mistakes as well as learn from your experiences.  Epictetus gave some advice on this “Admit not sleep into your tender eyelids until you have reckoned up each deed of the day–how have I erred, what is done or left undone”  So start, and so review your acts, and then for vile deeds chide yourself, for good deeds be glad.”

So let’s salute Alexander for ushering in these cults whose teachings have been passed down through history, creating new religions away from Paganism.  They are still leading us through this enormous cultural and social change to create a more enlightened world as we move more and more into the Aquarian Age.

Tagged: Age of Aquarius, ancient teachings of the Stoics
1 Comment

One response to “Alexander The Great Is Still Affecting Your World”