The Emperor Has No Clothes–Candidates and Government Nudity

The theater of the absurd and the incredulous is gaining in strength.  The rantings and the ravings of the 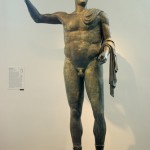 presidential candidates are something to observe.  The Republicans are terrified that Donald Trump might pull it off and if so, the Democrats are worried which candidate can go up against him.  Bernie Sanders would be an appetizer for him.  Never mind that primaries are very different than general elections, this year they are more bizarre, more media driven than ever and more unpredictable.  The playbook has been thrown out.  Dark money may play well in the general but it isn’t denting the primaries.  What farce and hysteria.  Donald Trump’s rallies look almost like brawls.  It seems all of the voters are angry and, as I also say, voters always come out to vote “against” something not “for” something.  This time they are really “against” just about everything.

As we go deeper into this 9 year of endings, it becomes more apparent that an old system is deconstructing.  It is consistent with the clash of civilizations–as well as civil behavior.  The Old Piscean Age represented by the religious right and the old structures of governing and the Aquarian Age represented by individual rights and a secular structure are like tectonic plates rubbing up again each other.  Even Donald Trump who has yet to deliver a whiff of a policy, has a past history of pro-abortion, gender equality and no religious agenda.  Hillary Clinton even attended his recent and 3rd marriage.  What a group!  Add to all of this is Michael Bloomberg who is waiting in the wings to see if it turns out to be Sanders and Trump by the middle of March.  He’s willing to dive in if the waters are just right.

Whoever wins this showdown, will piece it together for four more years as we limp through the ending of this grueling transit that began in 2008 and ends in 2024.  We have more exposure, more deconstruction and infighting until this cycle ends.  It will deliver the country back to the everyday person but we have several more years of this exposure, bureaucratic paralysis and birthing a new nation.  It will happen.  Citizens need to stop feeding themselves sound bites.  Here are a few tidbits that you might be interested to know:

Of those newly created jobs (revised down in October and November) 96% were retail, leisure/hospitality and healthcare/social assistance.  What is social assistance? He states they are largely people who help others understand and/or sign up for Obamacare.

The transportation industry–railroad and the warehousing industry lost 20,300 jobs in January.

How about a wage rise for teenagers.  It seems that the bump of +0.4% increase was nothing more than the minimum wages be raised in 14 states.  I.e. the minimum wage in New York went up to $9/hour, in California and Massachusetts, it was raised to $10/hour.

It goes on and on.  No wonder millennials with college degrees are having a difficult time finding decent jobs that pay enough to provide a decent living and pay down student debt.

Also, older women, I mean women in their 70’s are now one of the big rising trends.  Currently 1 in 7 stay or join the workplace after 65.  By 2024, that number is expected to rise to 1 in 5 women.  The biggest reason they give for working well into their 70’s is the need for income.

Take the candidates with a grain of salt.  Try and pick the one who has sensible policy, smarts, experience, leadership qualities, is seasoned and not hysterical.  Take government statistics with a grain of salt.  If you strip these groups down to the naked emperor, we would all blush and then realize what we believed and created.  No wonder most people are voting “against”.