The Deeper Meaning of Floods, Fires and Earthquakes

All these random acts of Mother Nature!  It is hurricane season.  It is fire season here in California and 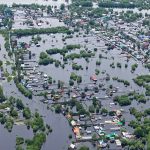 somewhere around the world an earthquake has happened or is about to.  This goes on and on and has probably done so since the planet was in formation.  Truth be told there is scientific proof that ocean temperature is rising and causing heavier rainfalls.  Droughts consume parts of the planet and trees in these areas burn bigger and more dangerously.  Earthquakes cause more damage to human life as we continue to inhabit all parts of the globe with humans.

There is, however, deeper meaning to these three natural events.  Fires, floods, earthquakes and even volcanic eruptions are Mother Earth’s way of cleansing herself of negativity.  She also gets rid her drones this way.  I don’t mean those who fly around and drop bombs or packages.  I mean those who continue to reincarnate here on earth and do not grow in awareness or consciousness.  It is a privilege to be able to come here and experience the lessons of living as a human on earth.  It may not seem so and it seems the human condition is very fragile and filled with suffering.  Nevertheless, we take the opportunity to reincarnate here so that we can grow in emotional energy and awareness and understand how to work with free will choice.  Both of these qualities are the grand advantages of planet Earth.  Grow emotionally by working with emotionally charged situations and learn how free will operates by making choice and living with your choices.

We forget that higher laws control this environment and through our arrogance we mistakenly believe we control it.  We forget that while we are changing from the watery age of Pisces, the Age of religions and control through fear to the air age  of  Aquarius, the Age of mind expansion, we cling to outdated teachings and controls.  At a more finite level we watch this play out in our culture, religions and politics.  It is simply a matter of time.  Our poor planning of cities and disregard and disrespect for Mother Nature in these cities will be corrected by Mother Nature in the same.  She will always be right and will always have the last word.  We will probably not realize this until she has taught us some more tough love for her.  For ions Earth has drowned herself to cleanse herself.  Ancient civilizations have disappeared as part of the cleansing process.  Currently, we are seeing various cities and countries disappear as she is doing the same.  It sounds dramatic but it makes much sense in the bigger scheme of things.  Practical too!  How often have you heard to soak a wound with salt water to heal it.

Michio Kushi in his famous book “The Book of Macrobiotics“ speaks to the 7th and last stage of sickness “arrogance”.  “Arrogance is the most developed sickness and also the one that most universally affects people’s lives today.  Selfishness, egocentricity, vanity, self-pride, exclusivity, and self-justification are some of the common symptoms.  Arrogance is the last stage of sickness and, at the same time, it is the cause of all previous stages.  Because of the arrogance that has prevailed among many populations, the entire world is full of sickness, misery, and unhappiness, not only physically and mentally, but also socially and ideologically.  To cure arrogance takes from a few years to an indefinite length of time of proper practice in a more appreciative and natural way of life.  However, arrogance can also be cured instantaneously through strong emotional or spiritual experiences, especially in the face of great difficulties and failure.  The cure of arrogance immediately produces a spirit of humility and modesty…..”

This is something wise to ponder in our righteousness and anger and especially in these times of great difficulties and failure.

Tagged: Age of Pisces vs Age of Aquarius, Arrogance and humans, deeper meaning of floods
11 Comments

11 responses to “The Deeper Meaning of Floods, Fires and Earthquakes”