As you wave the flag, eat some hot dogs and light some fireworks, remember that there is an invisible over-shadowing Hierarchy that watches over the United States.  This land called America was founded and directed by an illumined body that continues to watch over her.  In times of great crisis this illumined body draws near so that it can help influence during troubled times.

To some this may sound just odd and spooky but have you not wondered why and how this country was put together?  Why it is so different than so many other countries.  Why do so many people want to come here to have more freedom.  Why we keep policing the world and sending our troops, our money, our foreign aid to assist other countries.

Have you not wondered why America has very specific symbols tied to ancient meanings.  The words “New Age” and “New World Order” were not coined by recent presidents, they were used before and at the time America was becoming a republic.  The forefathers were divinely inspired to help us become creators of this new age.    To date she continues to establish freedom and cooperation within her own boundaries.  This, however, is just the beginning.  America’s Soul cannot be satisfied with just “self-accomplishment” alone.  Her early call was to a larger “world” service.  It is for her to continue this pioneering role in carrying her own won freedom and her genius for assimilation out to the world.   She must collaborate in the world affairs to further the ultimate establishment of the United States of the World. 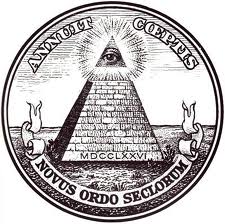 Our country was founded by Freemasons whose history goes back at least to the building of the Temple of Solomon.  They were knowledgeable in the Ancient mystical rites and symbols of the Egyptians, Essenes, Zorasters, Persians and Iroquois Indians.  They were seeking to establish a utopian society in the ancient tradition.  They gave the government a classic twelve fold structure-function-order.  In every way possible they incorporated zodiacal symbolism.  George Washington kept a circle of twelve generals around him to fight for the thirteen colonies.  The symbolism of 13 stars and 13 stripes on their flag, 13 letters in their motto “E Pluribus Unun” (From many, One), and 13 buttons on the sailor’s uniform accented their intent.  The number of colonies was not accidental but a hidden reference to an ancient teaching.

The country’s founders put the two-sided Great Seal of the United States on every dollar bill.   The Egyptian pyramid with 13 courses of stone capped with the triangular eye of divinity is on one side of the dollar bill.   Moreover, between the date at the base of the pyramid and the Eye at the top, which is Eternity, there are 12 layers of stone representing the 12 zodiac qualities which define the limits of the physical world.  Adding the base layer makes it a total of 13 layers.  The number 13 of our 13 originating states is here interpreted and celebrated as the sign of a resurrection of life out of death, fresh leaves from a desert, a wholesome gift of the light of Reason.

For more interesting facts regarding the greater meaning of the founding and destiny of the United States of America I suggest reading “America’s Invisible Guidance” by Corinne Heline.  It will give you greater understanding of why and how America has been created.  It will also give you a greater understanding of her current- day problems and what she needs to do to extricate herself from them.  At the time of America’s beginning, as well as in our current time, there are those who strive to halt the building of America.  These fall into two categories.  1) Those who fear change and want to continue with a system that was working because they have attained some degree of material ease or establishment and 2) Those who want to keep the masses from discovering freedom and breaking from obedience to someone or some thing.

Corrine Heline says that “we stand at the beginning of a new age, we need to gird ourselves to become creators of this new age.  …We can no longer just experience and observe the change but must become the actual architects of change….We cannot rely upon experts to show us how to do things or show us the way to go……It is time to grasp the plan of the master builder, the Supreme Intelligence, ‘to grow into his image’, to bring that plan down into materialization with intelligence, right use of free will, wisdom, love and purposeful intent.   Remember organized authority imposes creeds, and plays on fears and hopes of believers.  Human liberty stresses self responsibility.”  Artistotle wrote: “Freedom is obedience to self-formulated rules.”

As you progress on this road of growth and awareness, pause and remember that you have chosen to reincarnate here at this time and are playing a part in the improvement of humanity’s progress.  It is a privilege to be a part of this grand country.  We have our problems but within us also lies the solutions.  Be a part of her future so that when you finish this journey of this life, you will know you were instrumental in helping America remain the “beacon on the hill” and the protector of society