Advanced information on numbers, symbols and how to understand the unspoken language of your life.

You have heard me speak many times of the importance of the third month of the year.  This is the culmination month of the one

and the two–otherwise known as the offspring of the beginning months of the year.  The No. 1 and No. 2 combine (January and February) and birth the creative product, the No. 3, March.  You are ready to launch your plans and proposals for 2014.  The Mercury retrograde of February is over.  Get going and going.  Run, move and do not procrastinate.  The indecisiveness of the No. 2 month, February, is over.  You cannot afford to be non-committal.  Commit and move on out with your plans.

Work very hard over the next seven months.  These key months are your roll-up-your-sleeves months.  You can rest on your laurels in October and harvest during that month.  For now, March is your launch.  Enjoy the lightness that comes with the No. 3.  It is a great month to do cleanses (so is April) as the liver begins its big yearly discharge in the Spring.  Over March, April and May, plan on a detoxification of your liver and rid your body of all the heaviness of the winter months.  The liver, in Chinese medicine, hold anger.  Lighten up by discharging the liver waste products.   We officially launch spring later this month but now is a good time to begin the expansion so characteristic of the number 3.  Remember the No. 3 is all about creativity, joy, expansion and an upward movement.

Do the total number of letters in your full birth name mean anything?

Yes, most definitely.  The vibrations brought forth by the total number of letters in your birth name exert a great influence toward making us the individuals that we are.  They tell a story of how you will relate to situations and how you are inclined to react to experience.  It is a clue as to what and how you can manage yourself.  For example, I have a total of 19 letters in my full birth name.  There is a pattern as to how I will respond to life and my peculiar personality traits.

View from the Freeway–What is happening to American democracy?

I wonder if anyone paid attention to the recent news of the City of Philadelphia selling off its 175 year old (an asset dating back to 1839) Philadelphia Gas Works, to a private firm, UIL Holdings Corp, a New Haven, CT based energy company,  in order to pay for pension obligations.   The vote still has to be approved by City Council but, if completed,  the city will reap 1.86 billion dollars to pay off bond obligations and liabilities including fully funding PGW pension plans.  Any leftover will pay towards the city employee pension funds–currently less than 50% funded.  This isn’t so remarkable until you realize the implications of a bigger trend taking place.  The government has made financial promises that it cannot keep and never planned to fund.  The recent financial crisis has brought to 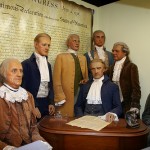 What would they say now?

light the over-indulgence of short-term spending over long-term investments.

As we are seeing around the world, the governments have over-expanded  and overburdened themselves.  They have borrowed to give voters and special interests what they want short term but neglecting the long term consequences.  We end up with situations where the taxpayers must sell off their assets to private corporations to sustain the unsustainable.  UIL Holdings Corp has promised to not raise rates for three years but after that, all bets are off.

There is no way the municipal and state governments will be able to pay these obligations without some sort of austerity measures which will be unpleasant to say the least.  We, the citizen and taxpayer, have created an encroaching government that we depend upon and expect much from.  On one hand we disdain it and on the other we depend upon it.  The governments have become more dysfunctional and ineffective.  Less voters are turning out for elections, more citizens distrust the government and its leaders, unelected technocrats have been handed great power, lobbyists are making life harder to run a true democracy and party financing has unnamed donors that expand special interests.

As I have written before, we have 9-10 more years of this exposure of the harm and neglect to our democracy.  We will have to face the handwriting on the wall.  The state, city and Federal governments must constrain the special interest powers.  We the people must stop allowing the government to give away the company store–our store–because they mismanaged and promised what they had no intention of keeping.  Many of our elected officials are poorly prepared for office and their lack of knowledge and skill is demonstrated in the poorly managed and corrupted governments.

Remember, we are, for the first time since we were created after the American Revolution,  revisiting the principles that made up this great nation and neighborhoods.  We need to consider very seriously the limitation of governments and stop allowing them to give so much away in the form of entitlements, appointments, privacy, perks etc.  Plato worried thousands of years ago that citizens would “live from day to day, indulging the pleasure of the moment”.  We have debt-financed democracy and it is not sustainable.  Our politicians are not prepared to do what is necessary and prudent so they give away our institutions, our income producing parking meters (Chicago) and almost our priceless art collection (Detroit) to buy themselves time and power.  Philadelphia is not the canary in the coal mine, it is the eagle in the coal mine.

Long term interest rates will creep up and probably be about 5 or 5.5% at year’s end

Top of the Morning to You!

More foreclosures and pain ahead for all the equity lines of credit that come due in 2014, 2015, 2016, 2017.  If you possess one of these lines and it is coming due during this time frame, contact your lender and negotiate months ahead of the due date.  If you cannot make the new adjusted payment, ask for a modification, even a hardship modification.  Do not wait until it becomes due.

The job market remains very soft for several more years.  Education will be key in gaining a better paying job.  If possible, move to where the jobs are and improve your skills.  Re-entering the job market can be exhausting if you have been on the sidelines for a long time.  You can cope and you will survive.

America appears in a weakened position and will remain in this position for several more years.  This is part of her recovery.  Do not be fooled.  She is on the ropes in appearance and power but it is a transition face and not permanent.  Expect her to maintain her power and re-invention.  She will go through some rough times in years ahead as she cleans up her house.

America, starting back in the summer of 2006, is moving away from war as we know it.  She will be very reluctant to put any boots on the ground and will maintain military support through technology, know-how, economic  and financial leverage and a spider-web connections around the world.  She will have small bases in many places.  This makes her able to respond quickly through covert means.

Not immediate, but expect an exposure of waste in the military.  This is a sacred cow in America but it is about to become a leaner cow.  There will be gnashing of teeth, wringing of hands and lots of hyperbole but eventually, we will start the contraction.

The Affordable Care Act is a mess but it has shed light on an area of our government and culture that has begged for light.  The Act will have many fits and starts over the next several years.  New laws, changes and exposure of redundancy and waste will eventually lead to a better health care system.  It will take years but it needs to be done.

Eventually, there will be a downsizing of the government’s direct role in the formal economy.

Alternative forms of work are now being created.  Volunteer work will increase as more people stay permanently out of the formal market economy.

“Only by building strong, self-sustaining local communities will people in every country be able to withstand the forces of technological displacement and market globalization that are threatening the livelihoods and survival of much of the human family”.  Jeremy Rifkin, “The End of Work”, G.P. Putnam’s Sons, New York, 1995